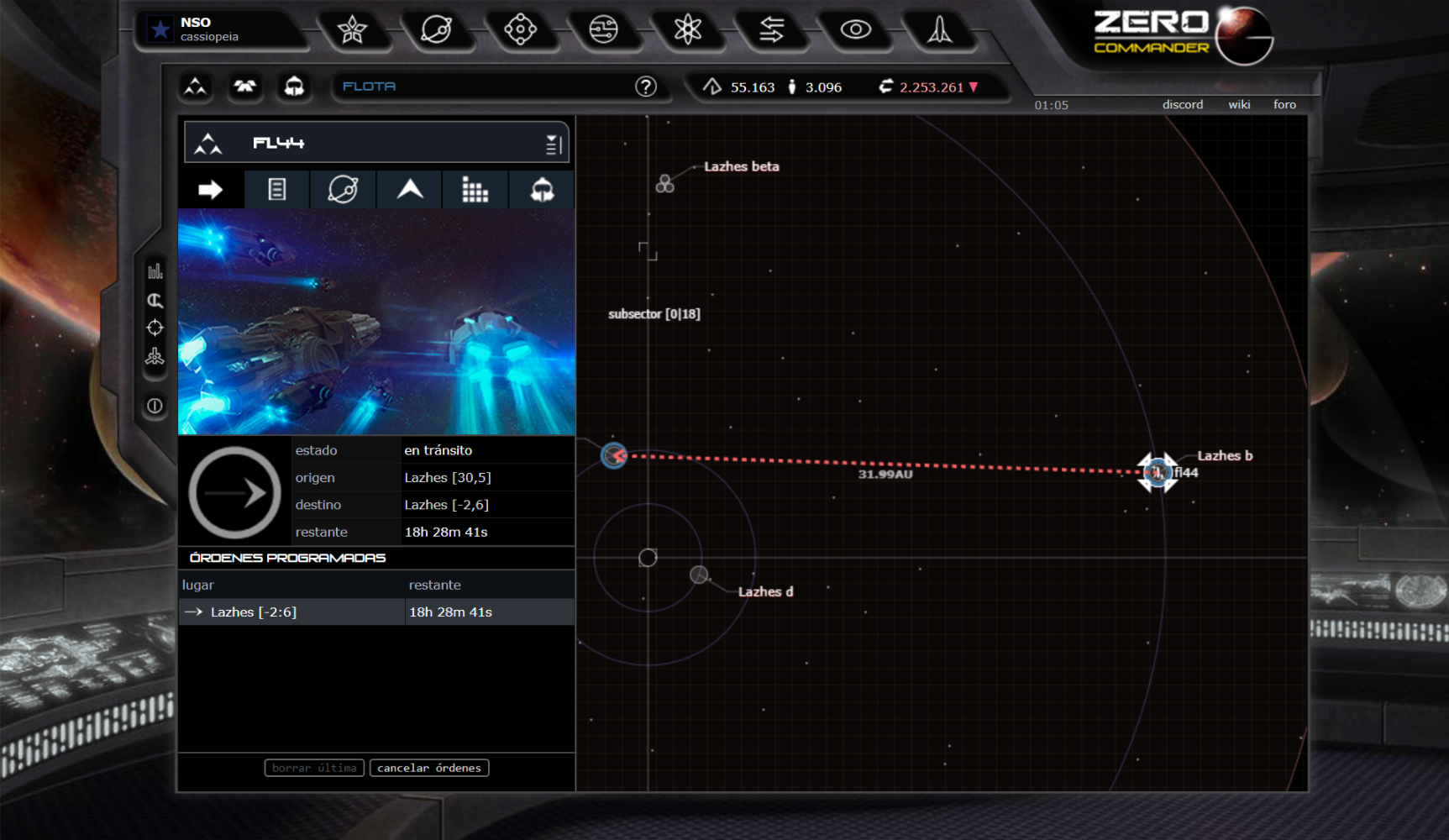 Fleets are groups of one or more ships that can perform tasks such as transporting goods, trading, mining, patrolling, performing missions, building bases, attacking, etc. They are always positioned in a system within a subsector, or in a enclave; being able to interact immediately with other objects like fleets, bases or planets that are in the same subsector.

Every fleet has a series of attributes that depend on the ships that compose it. Generally, the attributes of all ships are added, as is the case of firepower or presence, but in other cases they take the worst value. In the case of speed, the value of the slowest is taken.

The fleet order system is very powerful. Unlike other games, in ZeroG Commander, fleets can receive chained orders and retain the future status of the fleet. As an example, suppose we have an inactive (hidden) fleet in subsector [2,10] within the Phalax system, we can create the following chained orders:

During the execution of the orders the fleet will change status and moving if necessary to the subsector where it has to make the following order. In the order creation screen, the system will know that the fleet must make a move because it knows its future position. The execution of the example commands would be as follows:

All this process will be done automatically without the intervention of the player. They can be chained up to 5 orders, and their duration can be of several days and even weeks. The fleet will continue to execute its orders until some kind of event occurs that forces it to cancel them. In that case, a report will be received that the fleet has canceled its orders.

Orders can be erased from the end to the beginning or all orders can be canceled directly, in which case, in addition to deleting the orders, the fleet will stop the state in which it is as soon as possible to go into the (hidden) mode.

When creating an order, we will be able to see the path of the previously programmed orders and the new path that will be added after the creation of the order. It should be borne in mind that during the process of creating an order, the status of the fleet shown is the 'future state' of the fleet, that is, the position, cargo and troops it will have at the end of the programmed orders. In the previous example, when creating order 4 (skip to the Thalis system), the creation screen of the movement command will indicate that the state of the future fleet is the one at the end of order 3, ie: subsector [2,35] and a metals unloaded. The future state calculates:

There may be events in which the fleet encounters a future state other than scheduled and can not process the order, in which case it would cancel its orders. For example, you may have scheduled to unload a troop that has been destroyed in a previous match. You can not predict what the results of a match will be.

Creating an order requires access to the order creation screen. Each order has its own screen where it is possible to modify the parameters of the order. In the interface of the game we can locate buttons to create orders of each type in different pages by pressing the icon corresponding to that order.

The fleet status indicates the action you are currently taking. Fleet states change when a fleet begins an order or completes it or when a move it completes completes. Some states prevent new orders from being placed on the fleet, since they keep it locked until the fleet ends.

At the beginning of the game we have a fleet with the initial ships that accompany our faction. From there there are two ways to create new fleets:

Fleets have the following options:

This option allows to create a new fleet with part of the ships of the current fleet. Care must be taken with the carrying capacity of the resulting fleets as they must be able to load the goods they carry. These goods can be assigned to the original or new fleet just like the ships.

It allows to join two inactive fleets (in fleet state: hidden ). The ships of the second fleet will be part of the fleet from which the merger begins.

As its name indicates, this option allows to eliminate the fleet of our faction. Important : the fleet disappears from our control along with all the merchandise in your warehouse. Nor will we receive any resources like when ships are recycled.

Allows you to delete the last command from the fleet command list.

Cancel all orders in the fleet.

A fleet with a load capacity greater than 0 and inactive in a subsector can act as a bridge between one base and the other bases in the same subsector. This allows for direct transfers between the bases or between the fleet and the bases. If it has troop capacity, it can also act as a bridge so troops can be transferred directly between bases within the subsector.