The game takes place in a galaxy of enormous dimensions. The galaxy is divided into regions called 100 sector parsecs where there may be one or more planetary systems. The journey between systems is possible when we have ships with hyperspace jump capability. 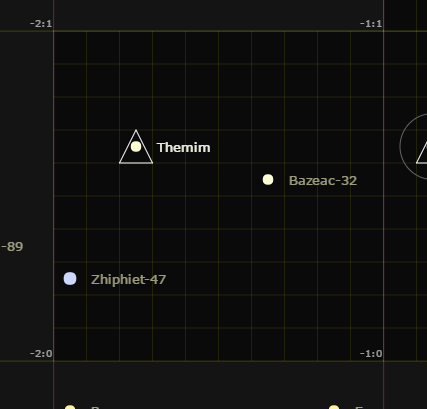 A sector is a square region of the space of 10 parsecs on the side. Its position in the universe is given by its X and Y coordinates. The nomenclature for the sector occupying the position X = 4 and Y = 7 would be: sector [4:7].

Most sectors contain one or more planetary systems. The star map is shown divided into sectors forming a grid.

Every faction begins the game in a random position of space. However, all factions will know their relative position in space, not their absolute position. The initial sector of any faction will be the sector [0: 0]. Thus, if a faction, for example, started playing in the sector [3:7], the sector [3:7] would be the position [0:0] for that faction.

Limits of the universe

The boundaries of the universe are not known, but it is known that their size is vast, so that no ship would be able to reach its limits in the course of a human life.

The systems are divided into subsectors which has an area of ​​10AU. At the center of the system is the star that can have different spectral types and emit more or less radiation. At different distances from the star we find the planets and moons (together called planemos. Within a subsector there may exist a planet and up to two moons.

In addition to the planemos, we find asteroid fields that contain valuable resources that can be exploited by mining fleets.

Factions can have several bases located at different points in the system. There are two types of bases: planetary and space. Planetaries are always located on a tellurian plane. Space stations can be placed in a planetary orbit (to exploit the resources of a Jovian planet or protect planetary bases) or can be located in a hidden point anywhere in the system.

Fleets can move to any system subsector, or change systems if they have jump capability. Fleets have different functions that can be programmed to be carried out on bases, subsectors or planets.

Missions are also located somewhere in the system. There you can move a fleet to do it.

A faction can claim the sovereignty of a system. This increases your points of prestige. The benefit will increase the greater the population that lives in the system. The struggle for sovereignty will be one of the points of greatest friction between players.

Enclaves are important places of the universe, controlling the system where they are gives important benefits in the form of prestige or access to special resources.